Back to all posts

Next Wave: About The Design

Every design includes one or more symbols, each represent significant meaning. While the whole motive may led people to have numerous perceptions, it is the artist's responsibility to clearly explain what each symbol means.

Although our latest single design is straight-forward, we are indeed responsible to explain what the design represents, so that others will not inaccurately comprehend. 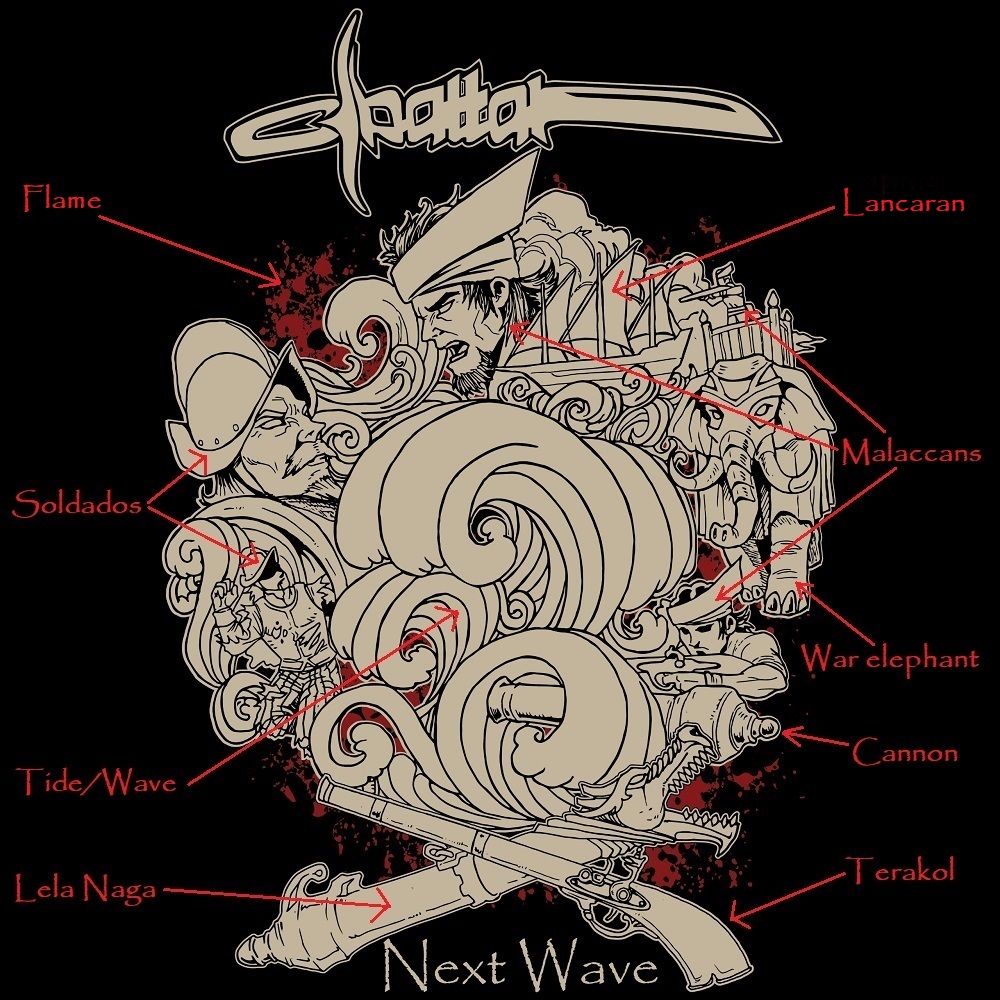 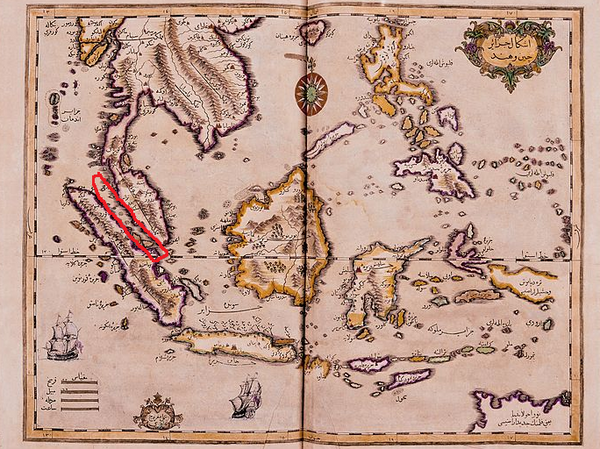 Tide - The centre of Sultanate of Malacca is located at present-day Malacca. The Straits of Malacca (highlighted in red) divides present-day Peninsular Malaysia and Island of Sumatra.

The war started at the Straits of Malacca, involving 40 warships carrying 2300 (more/less) soldados and allies, against massive number of Malacca inhabitants. Before the invaders arrived, they had to wait until the end of the monsoon to ensure safe journey from Goa. The tide is one of the main concern, since the journey took approximately 2 weeks. On their arrival, Malacca's Admiral fleet was at Riau. Although the Portuguese armada were at an advantage of good timing to attack the city, the Gujarats were there to offer their vessels for defense. While the Arabs, Persians, and Turks did the same giving their weapons and men, the Malays coming from different areas (Java, Makassar, etc.) gathered in unity to fight. It was recorded that no men were not ready to die in protecting Malacca. Perhaps aware of the loyalty and circumstance, the Portuguese strategised their good war tactics, although the first attempt to take the city had failed, leading them to retreat back to the Straits. At this moment, Dalbuquarque, the viceroy had a meeting with the captains to convince them to take part of the second attempt to take the city, although the majority number felt the stake was too high, and the command was not according to King D, Manuel's interest. 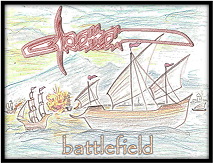 While the war was initiated at the Straits of Malacca, numbers of sailing vessels were used to defend the city, and one of them is the Lancaran. The image on the left is an illustration of lancaran, a type of Malay vessel used for war and commerce. Originated from the word 'lancar', which means fast, swift; it could carry up to 200 passengers. Although look very similar to the galé, the prominent difference is its 'balai' or fighting platform, and the vessel could be equipped with cannons of lela, rentaka, and cetbang type.

Apart from lancaran, Malaccans used barges, which they set them on fire to destroy Portuguese-hired junks that could not make it pass the bridge. According to The Commentaries of the great Alfonso Dalboquarque, "When the king of Malacca saw that the junk could not pass the sand-bank, and that for all that it remained there, and did not go back again, he sent four barges full of firewood, and pitch, and oil, to set it on fire, and as soon as the tide began to run down they set them on fire, and let them go on the turn of the tide down the river straight towards the junk, and this they did for nine consecutive nights." (Birch 1880: 112)

Both lancaran and barge are type of vessels originated from the 'perahu'. 'Perahu' is a Malay term refers to sailing vessel. Since the ancient times, the Malays, Saba's, and Vikings, were the prominent sailors the world has ever encountered. Not only more than 20 perahus are recorded to have been developed from the evolution, there were also laws specifically meant in handling the vessels, called 'Undang-undang Perahu' and 'Undang--undang Berlayar', despite the infamous 'Undang-undang Laut Melaka'.

Sailing vessels are norm and prominent in the Malay world, however not many aware of the firearm technology that they have developed. Number of artillery are shown in our single artwork to represent what the Malaccans used during the war : 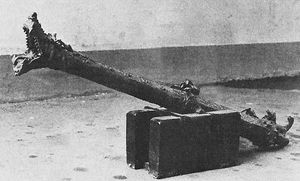 1. Lela Naga - A small-sized breech-loaded cannon. Generally made of brass, the ordinary range is about 400 yards, and some could shoot until 1000 yards, in an elevation (Newbold 1839: 210). The development of this type of ammunition was widespread throughout the Malay Archipelago and numbers of units were used to defend the centre of Malacca from Portuguese attacks. However, when the city fell to the Portuguese in 1511 A.D., both breech-loading cannons and muzzle-loading swivel guns were found and seized by the Portuguese.

The Lela cannons undergone development from time to time and were used to fight the Western invasions until the Blockade of Kedah in 1821 - 1838 AD. Built corrosion-proof, this technology slowly became unhandy and sold to be recycled. From combat, the application was turned into wedding gifts, and in the end sold to scrap metal dealers, would remind one of a Malay proverb that reads, "Habis madu, sepah dibuang", which means "one is used when applicable, then discarded/forgotten once not needed".

2. Terakol - A small effective short-range gun that uses the "wheel lock" technology. The technology is a friction-wheel mechanism that automatically ignites the firearm without a fuse. It was the next major development in firearms technology after the matchlock (also used by the Malaccans force to fight Portuguese invasion) and the first self-igniting firearm. Like other fire-arm technology, the Terakol has undergone various enhancement, and one of them is the development of Pemuras. Hollywood has made this short-range weapon famous through the film series "Pirates of the Caribbean".

3. Meriam (aka cannons) - In the Malay Archipelego, researches found cannons were manufactured in Pahang (Linehan, W., 1928, JMBRAS, Vol 6, Part 4), and since the state used to join alliance with Kingdom of Pattani and the Sultanate of Malacca, the technology was harnessed by both ruling states, as early as 15th century (or earlier). Pattani is famous for Meriam Seri Negara, and Meriam Seri Pattani, while large number of artillery in Malacca not only came from Pahang, but also from various origins in the Malay Archipelago namely Java, Brunei, Pagar Ruyong, and Acheh. The allies from Cambay even offered 40 cannons, despite support from the Shahbandar (see Castadenha, History of Exploration & Conquest of the Indies by the Portuguese).

War elephant - Malacca is famous for its Elephantry as stated in Sulalat u's Salatin and Commenteries of the Great Alfonso Dalbuquarque. The elephant represented in the single artwork is an Asian-breed where historical records wrote were exported from Siam. Indeed the export was possible when the post of Bendahara was handed to Tun Perak, whom strategised Malacca's diplomatic relations with the former after many years of conflicts. This peaceful relation had led to commerce trade that benefits both. Elephantry was widely used among the rulers in the Malay Archipelago. In Malacca, the elephant tusks were attached with swords, while the palace-look-alike howdah rode by armed personnel. With men maneuvering at the head and rear, these organic tanks with hard-to-penetrate-thick skin could bring psychological terror in battlefields. During the first attempt to capture the city, the elphantry had caused many soldados badly wounded (Birch 1880: 9). Also, according to Wilkinson R.J., The prince Alaedin [sic. Ahmad], mounted on an elephant, headed this charge in person; and the Portuguese lost 60 men before it was repulsed (Wilkinson, The Capture of Malacca, A.D. 1511, 1912: 75). Although not much primary sources could be found to illustrate Malacca's war elephant, we can assume they may look similar to the ones used by the Moghul Empire in the 16th century.

Soldado -  Soldado is a portuguese/Spanish term for soldiers. The struggled and wounded soldados are represented as a remembrance of how difficult to invade the city. Many thought the Portuguese has brought down the empire of Sultanate of Malacca completely, however, the false information was proven by the rise of new kingdoms - Perak and Johore, which were legacies of the Sultanate. When Sultan Mahmud (marhum di Kampar) retreated to Kampar, a new force was built to fight the Portuguese until his death.

Flame - when the soldados managed to set foot in Malacca, they have burnt down many buildings, causing the town on fire. The town was easily put into flame due to Malacca's town structure. According to historians, the building in the town was packed and crowded, even a cat does not need to jump to transit from roof to roof. The flame raged very fiercely and had destroyed a great part of the town (Birch 1880: 107). 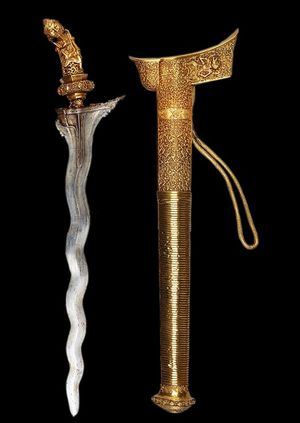 One might wonder - why the kris (or keris) is not applied to the design? Should not the Malay dagger highlighted to represent Malacca? Firstly, the Sultanate of Malacca was not an Ancient Kingdom, but is regarded as one of the Modern Malay Kingdoms, apart from Pattani and Demak. At that era, kris was no longer the main weapon used for war, rather it was partly common in close combat (e.g. to deal with altercation) instead. Depends on the design (e.g. 'lok') it is also a symbol of hierarchy, as justified in the Hukum Kanun Melaka (i.e. one of Malacca's code of law), that reads:

The kris was also made applicable for diplomatic relations. Earlier, foreign relation was embarked and developed through letters and gifts. Besides the letters found in Rekidai Hōan documents, the 9-lok kris (made for royals) presented by Sultanate of Malacca (during the reign of Sultan Alauddin Riayat Shah) was found as a gift to the Ryukyu Kingdom.

The image above is a 9-lok kris, originated from Sulawesi, believed to be made in the 17th century or earlier. The materials involved in making this masterpiece are wood, steel, gold, precious stones, among others. Measuring at 44.4 cm length, this Malay dagger meant for the royals and most likely were presented as a gift to the highest officials of the Dutch East India company (VOC) - William IV. Later, part of the kris ended up in the National Museum of Ethnology, Leiden and another part at Rijksmuseum, Amsterdam.

Very much that can be described about this magnificent dagger, however, nor the local and foreign secondary sources ever mentioned kris was ever used in battles during the capture of Malacca. Perhaps due to the presence of firearms technology that was more effective for distant-range combat had made those who bear the kris to switch its purpose for ceremonials or customs, whichever applicable. Although the appreciation of kris has been decreasing, there are efforts to nurture the new generation to acquire the skill in forging the infamous dagger. For example, the Brunei Arts and Handicrafts Training Center offers a three-year course in the art of kris making. Besides, numbers of blacksmith specialised in kris can still be found in the Malay Archipelago continuing the art from their national heritage